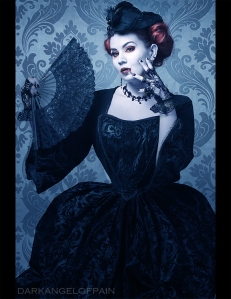 The cold and inhuman beauty of Snow White or S1m0ne discussed in my previous blogs has many predecessors; thanks to Tim Jones for pointing out a particularly interesting one, John Polidori’s short story “The Vampyre”, published in 1819. Since this was the first vampire story published in English, its establishment of two contrasting modes of beauty – the vampiric and the human, the dead and the alive – helped set up the vampire as a figure through which we can explore what it means to be human, and also what it means for a human to be beautiful.

You can read “The Vampyre” here.

Polidori (1795-1821) travelled Europe with Lord Byron from 1816-17 as his physician, but although he is said to have admired him initially – fancying himself as a mercurial poet and lover in the Byronic mould – he became jealous and left Byron’s party on bad terms (See James B. Twitchell, The Living Dead: A Study of the Vampire in Romantic Literature, 1981). Recent critics such as Twitchell interpret the vampire of Polidori’s story to be based on Byron, and it was this that Tim thought of when he read my Retouch Me post; I mentioned Byron as an example of ‘imperfect’ beauty having a much more powerful effect than correct and symmetrical looks.

Polidori’s vampire is, ostensibly, a gentleman, causing ripples in the drawing rooms of early nineteenth-century London. In a challenge to the idea of beauty as perfection, “Lord Ruthven” is desired for his “peculiarities”: although his features in “form and outline were beautiful”, Ruthven has a “deadly hue” that “never gained a warmer tint, either from the blush of modesty, or from the strong emotion of passion”.

I find it refreshing to have an example of male beauty that is so similar to the motionless, deathly beauty of Snow White – perhaps this ideal is not as rigidly gendered as it is often argued to be (See Gilbert and Gubar, The Madwoman in the Attic and Elisabeth Bronfen, Over Her Dead Body). Unlike Snow White, Ruthven is characterised by his actions; however, these actions are implicit, guessed at, and if they happen at all they occur offstage. In an echo of the scandal that led Byron to leave England, Ruthven is surrounded by rumours that suggest vice, perversion and the corruption of innocence.

Snow White may be a picture of purity, but I would argue that the fascination of this particular image of purity (there are plenty to choose from) arises from the uncanny mysteriousness of the untouchable, unknowable woman. Ruthven is the same: the young protagonist, Aubrey, is typical in his reaction to Ruthven, finding that though he was “near the object of his curiosity, he obtained no greater gratification from it than the constant excitement of vainly wishing to break that mystery, which to his exalted imagination began to assume the appearance of something supernatural”. With their expressionless faces and silent lack of emotion, both Snow White and Ruthven seem not quite human, not quite alive. They are disturbing, and utterly fascinating.

Polidori accentuates the inhuman, deathly beauty of Ruthven – who is not identified as a vampire until very late in the story – by contrasting his beauty with that of Ianthe, a young Greek girl with “the eye of animated nature”, who skips through the countryside with him, very much alive and warmly human. Polidori combines this description of liveliness with the surprising claim that Ianthe is so beautiful “she might have formed the model for a painter”, suggesting the motionless, displayed beauty of Snow White. But he immediately follows this with a retraction: “save that her eyes spoke too much mind for any one to think she could belong to those who had no souls”. This admirably feminist statement underlines the contrast between living and deathly beauty, making it clear that Ianthe’s key attraction lies in the movements of her body and mind.

It seems inevitable to us now, raised on Dracula and Buffy, that Ianthe is drained of her beautiful life by the vampire Ruthven. Polidori was one of the first to establish this convention, though he was probably drawing on much older horror stories that were told orally. But it isn’t just an effective plot device; the fragility of youth and beauty is made clearly visible, fed upon by the terrible, eternal workings of time. When Aubrey finds Ianthe’s body, having heard her screams accompanied by the sinister laughter of her attacker, her beauty has been converted into the vampiric mode:

“There was no colour upon her cheek, not even upon her lip; yet there was a stillness about her face that seemed almost as attaching as the life that once dwelt there”.

I think what is most disturbing in this image is that she is still beautiful. She has not been destroyed by death, she has been entirely changed by it. Death has made her its own, a picture of the terrible beauty of the eternal and unchanging. Vampiric beauty triumphs absolutely in Polidori’s story – Aubrey’s sister also falls victim to Ruthven and Aubrey himself wastes away into death, unable to save her. It is intriguing to think of beauty as being at war with itself; in retouched pictures, for instance, the human element that makes Ianthe beautiful is eliminated – in the name of beauty. What is it that we’re afraid of – the enchantment of beauty or its inevitable decay?

This entry was posted on Wednesday, November 30th, 2011 at 3:01 pm and posted in Literature. You can follow any responses to this entry through the RSS 2.0 feed.
« Cyber Beauty
Percentage of Beauty »