I will have to confess now that I only watched the first episode of the BBC’s Victorian crime drama Ripper Street, but I’m fairly confident that my criticisms will stand for episodes two and three. And for the first series that I also missed.

I know, questionable grounds to hold an opinion, but please don’t make me watch them all. 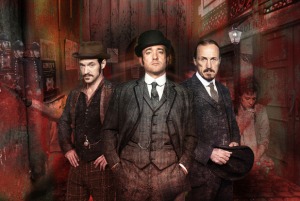 Frankly, I’m astonished that they made a second series, but apparently not everyone is so bothered by the following small niggles:

It’s pretty boring to have to cover those points yet again, since they apply to almost all TV and films, like, ever made and have been pointed out quite a number of times. But if the BBC haven’t yet noticed that this is a problem requiring action, then I guess it does need to be said.

After all, it wouldn’t have been that hard to develop some female characters who bear some resemblance to human beings, especially since women actually were people in the Victorian era, who had a whole variety of thoughts, conversations, roles and wardrobes, despite the best efforts of history and pop culture to convince us that they were all either tightly corseted wives or tightly corseted whores. It is no longer convincing to represent women in this ridiculous cartoon way, whatever period the TV drama/film/book is set in, because we know that women. are. people.

Matthew Macfadyen, you have been Mr Darcy. If Jane Austen could write proper female characters in 1813, why are we still not getting it?

This entry was posted on Wednesday, November 13th, 2013 at 6:15 pm and posted in Feminism, TV and Film. You can follow any responses to this entry through the RSS 2.0 feed.
« The Logic of Stupid Poor People
Frankenbabe »