Women as Wives and Workers: Marking Fifty Years of The Feminine Mystique

There are some books which make their mark even on people who have never read them, and Betty Friedan’s 1963 feminist work, The Feminine Mystique, is definitely one of them. On Saturday 30th November I went to a great conference at Royal Holloway University of London, marking fifty years of Friedan’s influence and questioning the place of her most famous book today.

And if I’m honest, I actually couldn’t remember if I’d read The Feminine Mystique. I knew what the ‘feminine mystique’ was, and had read masses of feminist work talking about Friedan’s book or drawing from it, but wasn’t sure if I had ever read the original. I didn’t admit this at the conference (imagine!), but it was a running joke that many people have ideas about the book without having read it. Its influence has spread far, but has often been distorted along the way, predictably placing Friedan in the Angry Feminist camp (you know, the one that doesn’t really exist).

So if you aren’t quite sure whether you’ve read it either, the feminine mystique is Friedan’s identification of ‘the problem that has no name’: the frustration and dissatisfaction of the 1950s housewife, trapped in the domestic with her identity disappearing into that of her husband and family, and unable to speak out because the role of wife and mother has been so idolised and mystified that it is the only acceptable role for a woman to play. 1950s adverts for household products provide the best illustration of this, painting a picture of the beautiful, demure and capable housewife finding the deepest satisfaction in a new vacuum cleaner. 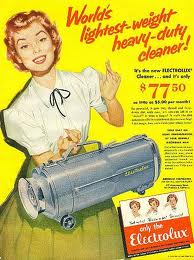 I won’t attempt a full review of the Royal Holloway conference because I couldn’t do justice to all the insightful papers and discussions, so instead I’ll talk a bit about the reception of The Feminine Mystique, and beauty, since that’s my particular hobby horse.

For decades now, Friedan’s book has been criticised for failing to address anyone but the American middle classes – after all, working class women tend not to have the luxury of getting bored at home. Alice Lilly’s conference paper highlighted how working-class US mothers in the Aid to Families with Dependent Children Programme have been forced, throughout the 20th century, from a financially unfeasible housewife role to an equally impossible working mother role, their income dependent on changing ideals and political machinations. From a different perspective, Caitríona Beaumont fleshed out the 1950s housewife image by detailing the range of community and political work done by women in organisations like the Women’s Institute. Gwen Jordan discussed how even Friedan’s friends and contemporaries in the upper-class neighbourhoods of her hometown Peoria didn’t identify with the housewife Friedan described – an image that Friedan herself didn’t fit either, active as she was in all kinds of work beyond the home.

I think it’s generally accepted that Friedan’s concept of the feminine mystique was important in articulating gender issues that simply didn’t get airtime, and that it would have been difficult to include the huge range of women’s experiences under one banner. What The Feminine Mystique did make clear was that women needed to be able to work, for the sake of themselves and their families, and that the traditional structure of paid work just didn’t accommodate people who might take time off to have children and then have to look after them. We still have that problem.

Another problem we still have is the mystification of certain ideals of womanhood. Household products are still advertised to women, and the perfect wife and mother who can raise kids, keep her home exquisite, please her husband and now have a career too, is still an ideal whose pressure is felt everywhere. And that perfect woman is very much expected to be slim, sexy and fully made-up even after all the kids and the work. Naomi Wolf’s 1991 book The Beauty Myth made an instant impact with its updated understanding of feminine ideals, and the way that women can be kept under control and fleeced of their cash by the pressure to be beautiful, and I won’t be surprised if there is a conference marking the 50th anniversary of that book. I suspect it will remain as controversial and influential, even among those who haven’t read it, as The Feminine Mystique.

What these two books have in common is the idea of mystification, and how one of the main pressures on women is the fact that they are supposed to live up to an ideal at all. The presence of any ideal is a problem when it becomes a requirement rather than an aspiration. Beauty is central to the feminine ideal we have, similar to the way in which strength is central to ideals of masculinity, but men are not nailed to the cross of their ideal image in quite the same way as women. I don’t think ‘the masculine mystique’ would strike such a chord. Or would it?

The feminine mystique has a slightly different face in 2013 – though not as different as many of us would like – and it is now a problem with many names and few solutions. Discussion at the conference shot out in all kinds of directions, taking in generational conflict in feminism, pink toys, husbands’ surnames and gender segregation in religion. And that is precisely the value of The Feminine Mystique: for all the things it doesn’t address, it still opens up discussion of many problems that need to be named and challenged.

With thanks to the conference organisers, speakers and fellow feminists.

This entry was posted on Wednesday, December 11th, 2013 at 5:05 pm and posted in Feminism, Literature. You can follow any responses to this entry through the RSS 2.0 feed.
« Frankenbabe
New Year, New Blah »

3 responses to “Women as Wives and Workers: Marking Fifty Years of The Feminine Mystique”