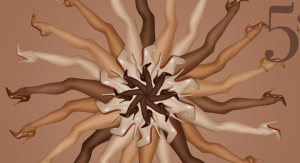 Jezebel have brought to my attention Christian Louboutin’s new range of nude shoes, which come in five different shades of ‘nude’ rather than the traditional ‘white-person nude’ shade that has dominated fashion… forever. Hurrah. This is the latest in an emerging trend of more inclusive fashion – foundation now comes in more than one non-white shade (though the split is still woefully unequal) and I swear the women’s magazines here in the UK (and their advertisers) have begun to use more non-white models. As in, more than one per issue.

My ‘hurrah’ didn’t quite get an exclamation mark because I am reluctant to whole-heartedly endorse shoes that cost £390.

Or shoes that don’t actually have diversity as their rationale, but instead are intended to elongate the wearer’s stumpy and inadequate legs by blending invisibly into them, according to the Daily Mail (I may have paraphrased).

The shades also have names like ‘Fair Blush’ and ‘Rich Chestnut’, which may not be surprising but continues to be offensive. These saccharine euphemisms always raise the question of why black people have to be ‘chocolate’ etc., either by their own definition or someone else’s, in order to embrace blackness as a good thing. Are we really still having to justify that black can be beautiful?

Finally, when I searched for ‘nude’ on Christian Louboutin’s website, I had to scroll through like, a million ‘white-person nude’ shoes before I found the three lonely brown ones.

Might have to replace that ‘hurrah’ with a small, wry smile.

This entry was posted on Friday, October 11th, 2013 at 1:07 pm and posted in Fashion, White and Not White. You can follow any responses to this entry through the RSS 2.0 feed.
« Meet the Most Beautiful Man in the World
Laminated Faces »

One response to “Nude Goes Native”