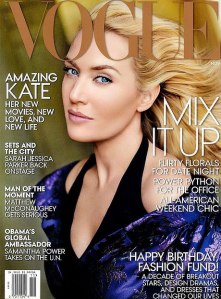 Over at the Guardian, Emma Brockes has usefully given voice to how sick everyone is with retouching, and its over-use – in this case, Mario Testino’s cover shot of Kate Winslet for Vogue. Brockes’ use of the term ‘laminated’ is particularly appropriate, as the 38-year-old Winslet is Photoshopped far into the realm of plastic.

This may be the only kind of publicity the Vogue cover will get from mainstream platforms like the Guardian, and it is becoming the norm. Three cheers! It’s just a shame that women’s (and men’s) magazines don’t seem to be listening, caught in a cycle where perfection is required by the industry and increasingly rejected by the public.

However, as so much noise is being made on the subject, I have faith that eventually the magazines might get the message. And stick it above the editor’s desk. Laminated.

This entry was posted on Tuesday, October 22nd, 2013 at 1:00 pm and posted in Fashion, Retouching. You can follow any responses to this entry through the RSS 2.0 feed.
« Nude Goes Native
Konstructing Kim »